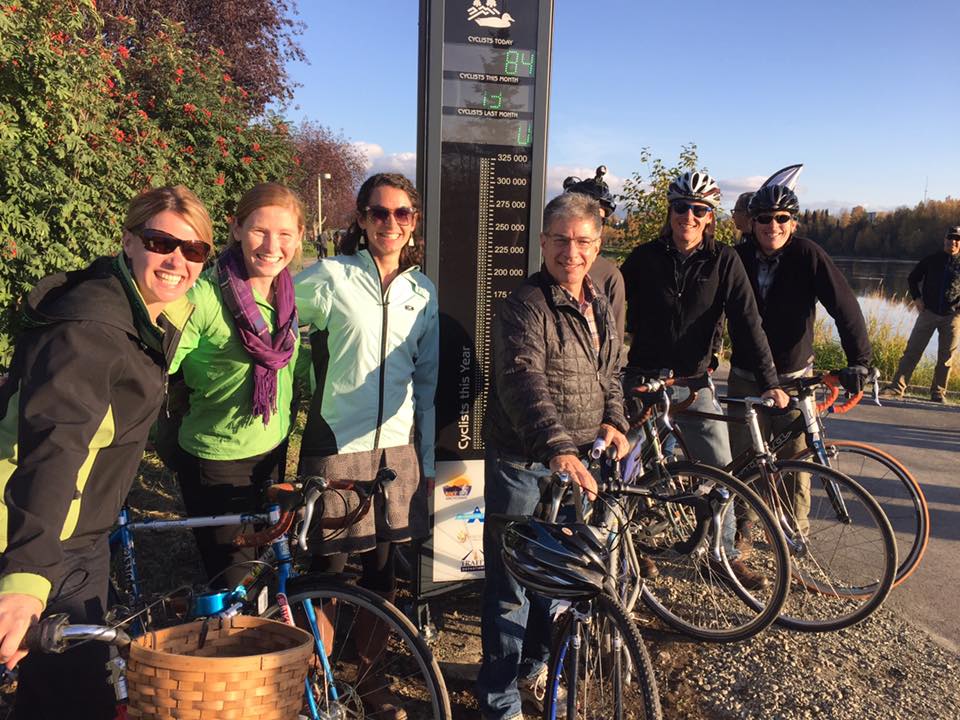 Remember the Bike Totem mock-up presented for Bike to Work Day? Thanks to the generous support from the biking community (you!), it was installed this September. At a small ribbon cutting event on September 27th, Mayor Berkowitz and a couple dozen cyclists rode down to the new Bike Totem, which is installed at Westchester Lagoon at the confluence of the Chester Creek and Coastal Trails. As the workday ended, hundreds of afternoon commuters, families, and recreational cyclists rode by. Previously, this would have been a countless number, but not anymore. The number displayed at the top of the totem steadily climbed, proving our city’s love for our trails and bikes.

So, why does this matter? We simply don’t have great data on how many people are biking in our city. As Mayor Berkowitz said, “you can’t manage what you don’t know.” And we don’t know exactly how many residents are using our roads and trails. In 2014, the Muni conducted a Regional Household Travel Survey and 2.4 percent of the respondents reported that they regularly ride a bike to work. This may seem like a small number, but when applied to the whole city, that comes out to be over 7,000 people who bike to work on a regular basis! And this number may be much more. As bicycle, gear, and lighting technology improve, more people are opting to ride instead of drive for commuting, running errands, and recreation. As our infrastructure expands and improves, this number will continue to grow. 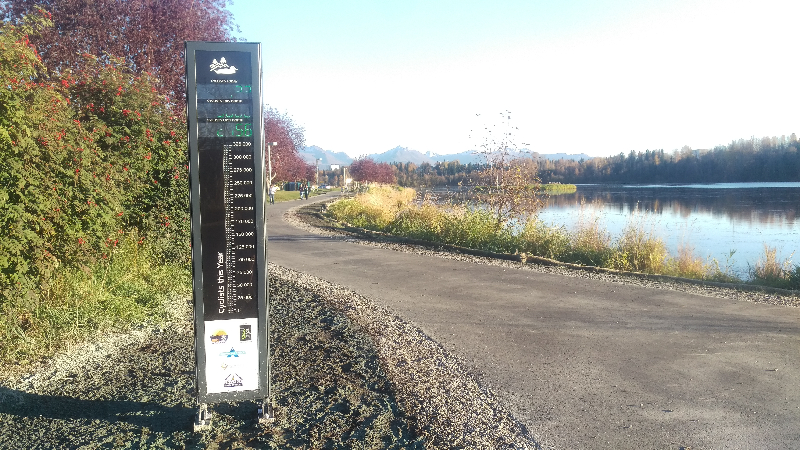 We will have some raw data that not only shows that you count, but proves it too. The bike totem will give the Municipality of Anchorage real numbers to show exactly how many people in Anchorage ride (at least at that intersection). Of course, more locations than this one matter and it’s important to know where other people are riding. Many of us use apps such as Strava or MapMyRide to log and track our bike rides. These apps are very useful for individual riders to analyze their performance, track distance, and just have fun. But they can also track anonymous information, which can be used to shape city policy.

Strava produces a visual “heat map” that shows a heavy rate of ridership throughout Anchorage. Check it out! By using apps like Strava to track your ride, you can actually influence future improvements in Anchorage. The data collected from apps and bike totems can be used to analyze the areas that are most important in trail connectivity and trail safety, generating a more complete picture of ridership in Anchorage. With accurate and comprehensive data we can start making wise decisions about where bike facilities are needed. Further, we can start tracking how previous decisions affect cyclist patterns. For example, we will know how much ridership increases when the northern part of Spenard Road gets dedicated bike lanes in 2017. Having a complete picture of cycling will also be instrumental in implementing Vision Zero.

Simply by riding you prove the need for improved bike infrastructure in Anchorage. Ridership is increasing, but it’s important to know that actual numbers to justify such improvements. So, download Strava, jump on your bike, and ride on down to the lagoon! Prove that you count!