I am going to be honest with you all here, I never heard of the Winter Cycling Congress before the Bike Anchorage board offered me the opportunity to attend the international conference. Further, I never, ever, considered visiting Calgary, a large city in central Canada that, for outdoor enthusiasts like myself, is shadowed by its scenic mountainous neighbor, Banff. When I described my upcoming trip to my father, he simply remarked, “Calgary, huh, cattle country!” He isn’t wrong, Calgary is home to its namesake Stampede, one of the largest rodeo festivals in the world. But, despite their bucolic roots, Calgary is also an ambitious modern northern city with big plans to advance its transportation infrastructure, and they were keen on sharing those advancements with the rest of the world.

Calgary experienced a crippling cold snap the week I visited. One of those deep freezes that burns down to your bones. Upon arriving, I sorted out some lost luggage issues and set out, sans warm winter wear, to make my way downtown via public transportation. I missed my connecting bus and train stops, twice, and quickly made friends with three different drivers. Despite spending hours slowly realizing I am worthless at navigation without internet service, I became intimately knowledgeable with Calgary’s vast public transportation network. The operators and were polite and helpful, the multi-modal system offered a variety of efficient routes, and the services were frequent. Best of all, locals heavily trafficked the routes, making their way about the city. I arrived at my hotel tired but also excited. Riding the bus and light rail was cheap, useful, and felt great! Reenergized, I vowed to ride our People Mover upon returning home! 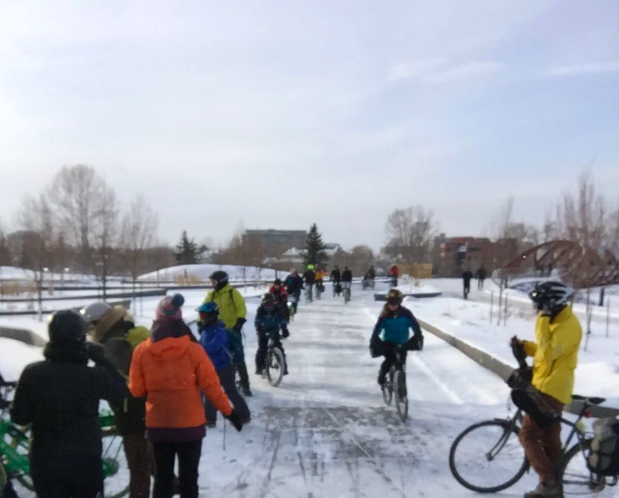 The Winter Cycling Congress was held at Calgary’s jaw-droppingly beautiful new public library. Located in the heart of downtown, the library is easily accessed by train, bus, and best yet, bicycle via the city’s keystone protected cycle track and bike lane networks. Each discussion sounded thoughtful and relevant and I had trouble deciding on which ones to attend. I strategically mapped out my week and dove right in. One highlight session taught participants different methods on gathering data from citizens who use transportation networks. The session concluded with us completing a hands-on activity where we gathered experiential information from pedestrians outside on the streets. This tool is a helpful companion to strict numerical data during planning and design phases of city projects. 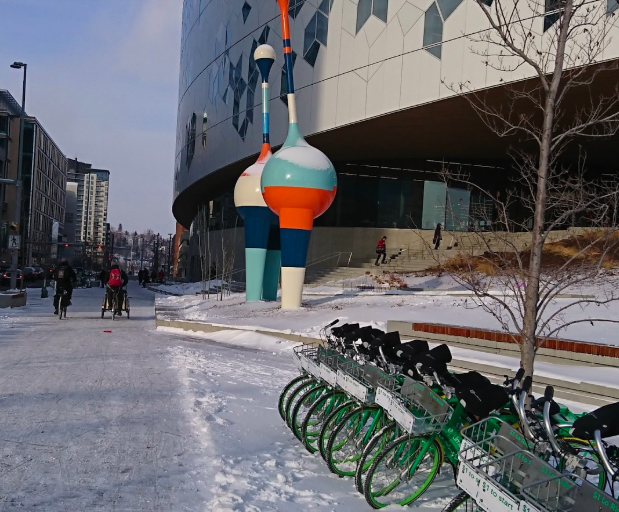 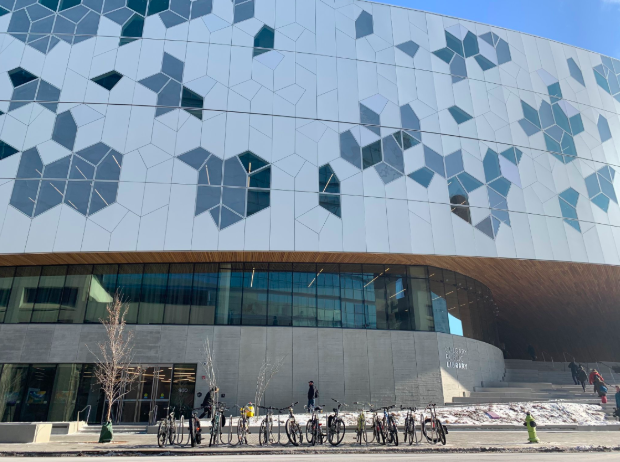 My favorite session involved an interactive discussion on urban priority transportation networks. I know, what a mouthful, but stay with me. City planners from across the globe demonstrated in detail the process behind composing guidelines and master plans for cycling infrastructure in northern cities. I’m talking about cities that have snow, ice, darkness and small budgets; you know, the usual hang-ups we encounter during urban planning in Anchorage! The class then broke up into small groups, studied a city map, and started designing. We laid out cycling thoroughfares, identified priority networks for winter use, prepared budgets, and proposed maintenance operations and schedules. The biggest takeaway: set your city up to succeed by applying a lot of attention and detail to maintenance! Sound familiar? A bonus takeaway: most cities find separated cycletracks easier to maintain in the winter than bike lanes. 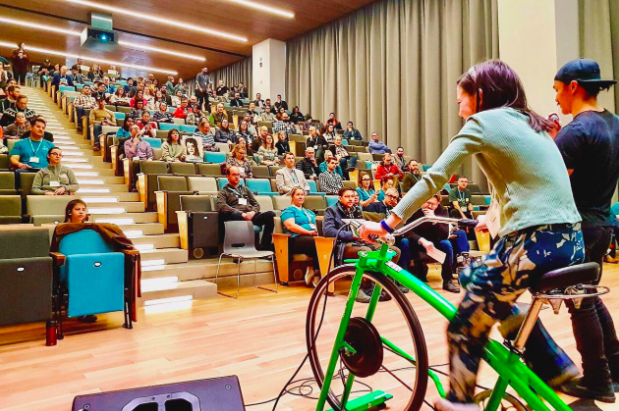 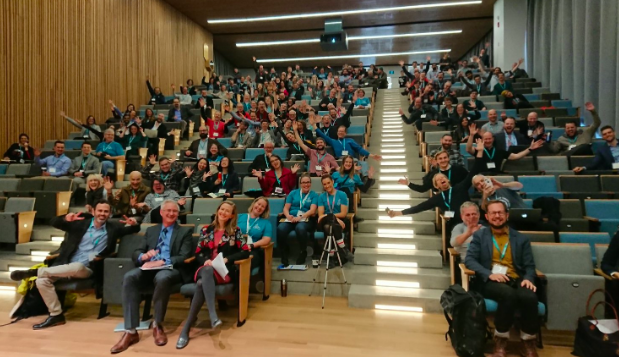 Best of all, I rode about the city and got to experience how this infrastructure works first hand. I traversed town during a weekly hockey game: a heavily trafficked experience that I easily navigated thanks to designated bicycle signage, lighting, and lanes. No yelling, no honking, just people efficiently moving about Calgary. I toured city murals during an afternoon bike-meetup. On Winter Bike to Work Day I met up with new friends, biked to a park, and watched the sunrise over coffee and a warm fire pit. Calgary’s streets and trails felt safe and allowed me to travel effectively. I felt at ease as a car-less tourist in Calgary and clearly, multi-modal infrastructure was a successful investment for the city as indicated by the droves of users all biking, walking, and moving freely despite the frigid temperatures! 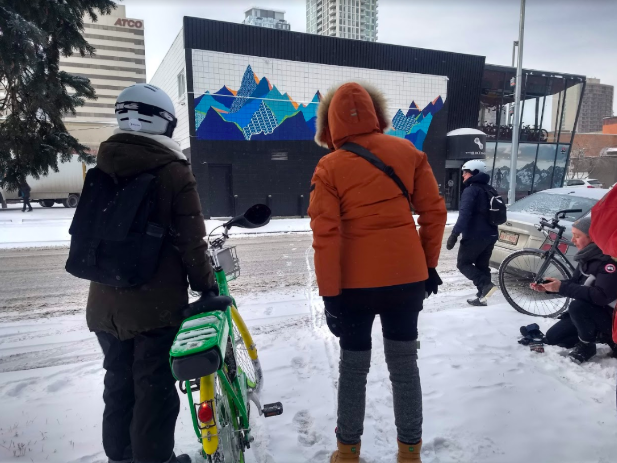 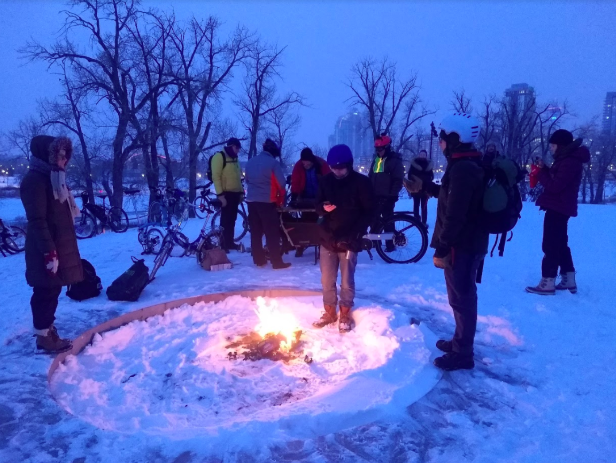 I feel Anchorage is a city that prides itself on resilience, and as Alaskans, we identify as makers and doers. We don’t see problems as barriers, but as challenges that just need to be solved by good design and hard work. My time at the Winter Cycling Congress gave me the tools to envision a better Anchorage: streets designed to reduce traffic deaths and injuries: multi-modal networks that support efficient harmonious travel, corridors that incite exploration and adventure. What is more Alaskan than that? 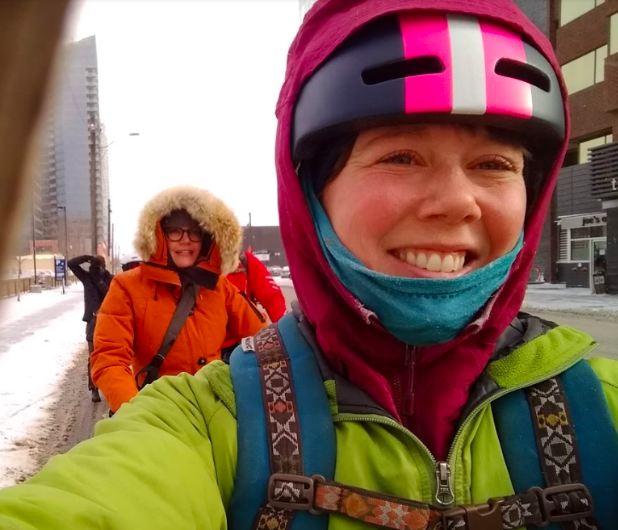