Any time some article about bicycling in the city runs in the ADN, the folks who likely have never ridden a bike in town come out and say “we built all these trails for you – stay off our roads.” For those that ride these multi-use pathways (they are not trails and they were not built solely for bicycle use but for enjoyment by all users), and especially those that use sidewalks, it is clear that sticking to mult-use pathways and sidewalks is downright dangerous.

BCA has been giving “Safe Bicycling Techniques” clinics for the last year and we constantly highlight the dangers of sidewalks and multi-use paths. So it was with little surprise to read an article on Bike Portland about a recent literature review conducted by a group of scholars at the University of British Columbia has found that indeed sidewalks and multi-use pathways are the most dangerous place to be on a bike.  They examined all available studies linking bicycle safety with infrastructure and found that:

The following is the Bike Portland article in its entirety and is worth the read.

A group of scholars at the University of British Columbia have found otherwise. They conducted a literature review, looking at all available studies linking bicycle safety with infrastructure. Their conclusions will be counterintuitive for some.

That’s right — riding on sidewalks and multi-use trails is less safe than riding on major roads. The studies surveyed found that riding on the sidewalk resulted in risks 1.8 to 16 times the risk of cycling on the road. One study found that sidewalk-riding crashes (the study’s authors purposefully do not use the word “accident”) exclusively occurred while riding against the flow of car traffic on the adjacent road.

These conclusions, the researchers are quick to note, are tentative, pending better data. They only found 23 English language studies that took on the relationship between bicycle safety and infrastructure, as opposed to a wealth of studies about helmets. They write,

“To date, most studies of cycling safety, especially in North America – have emphasized helmet design, regulation, and implementation to mitigate the severity of cycling injuries when a crash occurs.” But, they point out, helmets protect only from head injuries, and “more importantly, do not prevent incidents from occurring in the first place.”

“One of the major advantages of infrastructure-based improvements, compared to personal protective devices such as helmets, is that safe infrastructure provides population-wide protection for all cyclists,” study co-author Meghan Winters said in a press release. 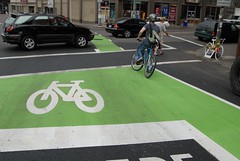 A team at PSU is conducting an
analysis of Portland’s bike boxes.
(Photo © J. Maus)

The research on injuries and infrastructure that the researchers did uncover is often contradictory and does not use standardized (or even always decipherable) terms to identify different types of facility. There are deep problems with the reporting of data on cycling crashes and injuries.

What’s more, many types of infrastructure now common in North America have not been studied at all, including bike boxes, sharrows, and the relationship between cycling and speed bumps. (Some studies are in process — for instance, a bike box evalution is currently underway at the Institute for Bicycle and Pedestrian Innovation at PSU.)

The researchers have hopes that their review serves to point other scholars towards opportunities for filling in the many gaps in our knowledge of bicycle infrastructure and safety. As more studies are conducted, they say, there will be better data available to inform engineering guidelines to make bicycling safer and more appealing.