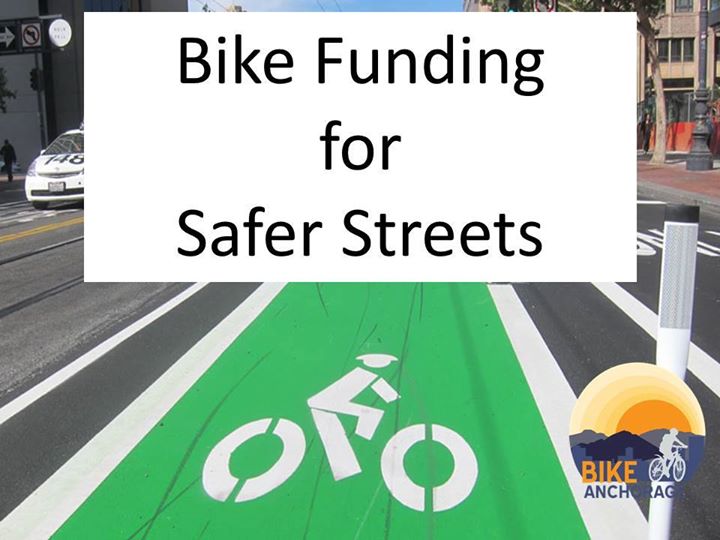 As you may recall from one of our previous blog posts, A Tale of Millions, Bike Anchorage has been hard at work to see that our Anchorage Bicycle Plan is implemented. In 2012, after a succesful grassroots campaign and lots of support from bicyclists like you, we were able to increase funding for Bike Plan implementation over 2013-2014 from 1 million to 2.3 million—more than doubling the proposed funding. The money would stripe and mark new bike lane routes. This would be an important step to making our streets safer for both bicyclists and motorists.

Bike Anchorage, our members and those that currently bike or would bike if our streets were safer and more welcoming expressed our disapproval and frustration. To those that bike and those that would like to bike but don't becuase they see our streets as unsafe, the loss of $1.3 million dollars is a big deal. It is a major setback towards making our streets safer. Safe streets are important to everyone and new bike infrastructure will help make our roads safer for pedestrians, bicyclists, and motorists alike. The failure to appropriately obligate funds, as set out in the TIP is concerning. Of even greater concern is the apparent lack of accountability and transparency and an inability to adequately inform the Bicycle and Pedestrian Committee that there was a possibility funds could not be obligated prior to the deadline. There is no excuse for learning of this problem after the deadline for obligating funds had passed.

In response, we launched a petition to encourage AMATS to find additional funds that can be dedicated to bike plan implementation. Thanks to your incredible support, we just submitted our petition to AMATS. On July 1st, we submitted the petition, which was signed by 377 people, asking that AMATS allocate additional funds to Bike Plan implementation over the coming years. We thank all of those that spoke out!On behalf of all those who bike or would bike if they felt safe, you can count on Bike Anchorage, as we continue to advocate for adequate funding for Bike Plan implemenattion.