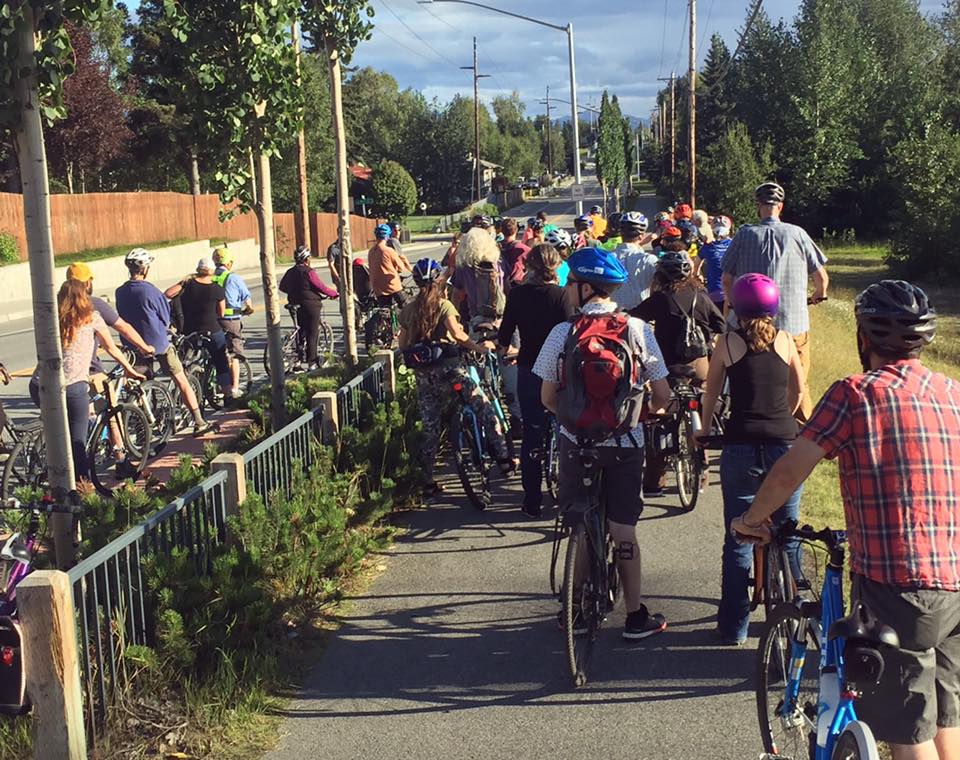 About 50 people gathered for a bicycle tour of Spenard, highlighting the neighborhood’s assets, dangers, hazards and amenities. The tour was part of an effort sponsored by Bike Anchorage, the Anchorage  Metropolitan Area Transportation Solutions (AMATS), and the municipal planning department to develop a long-range strategy for what has been defined as the Spenard Corridor. The intention of the planning effort is to view not just Spenard Road, but also the entire surrounding neighborhood, through the lens of transit-oriented development.

Our bike tour began at Bosco’s Comics, at the north end of Spenard, near Fireweed. We rode down Spenard Road, taking the right lane and following all traffic signals. 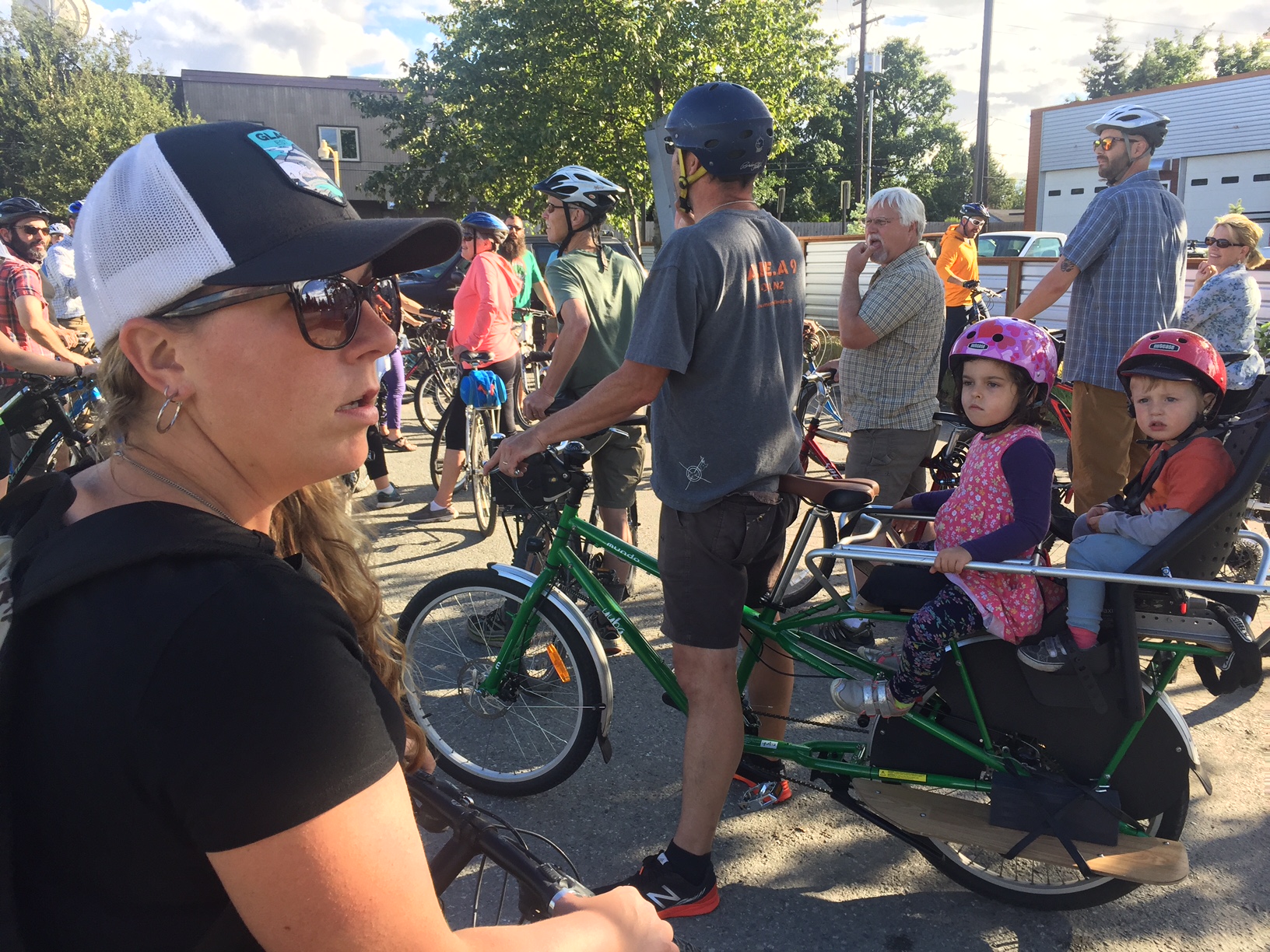 Our first stop was on 33rd Avenue, home of the Anchorage Maker Space, Off the Chain Bicycle Cooperative and of course, the Tap Root. This quadrant of the neighborhood contains a hodgepodge of business zoning, residential homes and, at the northwest corner, our soon-to-be neighbors: the Alaska Legislature. It is defined by long blocks that run east-west, and the western boundary is Minnesota Blvd, a high-intensity traffic corridor with few safe crossings. Minnesota Blvd. divides the Spenard neighborhood, challenging safe cross-neighborhood interaction.

We continued on to Chugach Way, where we began to follow the Fish Creek watershed. Fish Creek used to be home to a vibrant salmon run, but is now culverted and, for much of its upper reaches, buried. Heavy rains have been known to flood the drainage, blowing manhole covers. Chugach Way is an east-west cut-through for sometimes high-speed traffic between Arctic and Spenard attempting to avoid 36th Ave. Unfortunately it is too narrow to accommodate pedestrian infrastructure and contains blind corners. In the brief time the group was discussing Fish Creek, we observed five pedestrians and at least as many vehicles.

Continuing on through the Evergreen Subdivision, we passed Wilson Street Park and a quiet neighborhood of single family, and multi-family homes en route to the nearest safe Minnesota crossing at Tudor road. There, we waited on a narrow sidewalk while high speed traffic rushed past. In January, the Alaska Department of Transportation held a comment period to assess improvements to Minnesota Blvd. Pedestrian safety clearly needs to be addressed through that process as well as the corridor planning process. 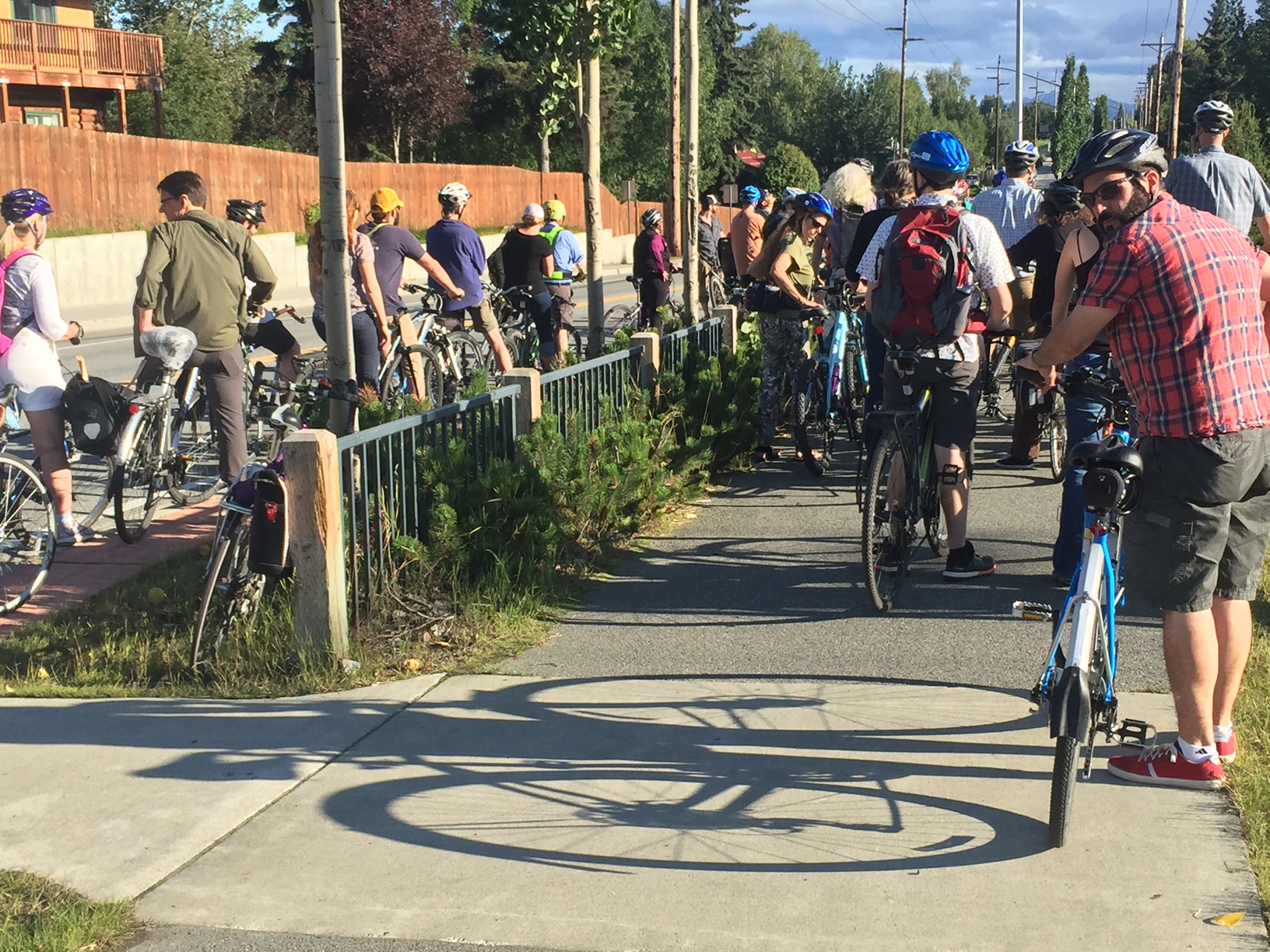 As we passed Spena

rd Builder Supply, nestled in a heavy industrial quadrant pocked with warehouses and staging lots, large semi trucks rumbled by. Our sidewalk disappeared as we crossed the railroad track on West Tudor and picked up a tiny section of non-motorized trail near Red Bridge Park. At the end of West Tudor, we stopped at large vacant lot on Northwood Drive, recently targeted for a high density housing development before area residents turned out to oppose the requested re-zone.  Affordable housing in Anchorage is a high priority, but without safe non-motorized access to surrounding businesses, residents would merely add to traffic congestion, even in spite of additional public transportation frequency.

Continuing through the gateway at International Airport and Spenard, sometimes labeled the hotel district, we observed a lack of supportive development like grocery stores or entertainment within walking distance for neighborhood residents or out of town visitors. Instead, the gateway contains a high number of car rental or sales lots and airport parking. 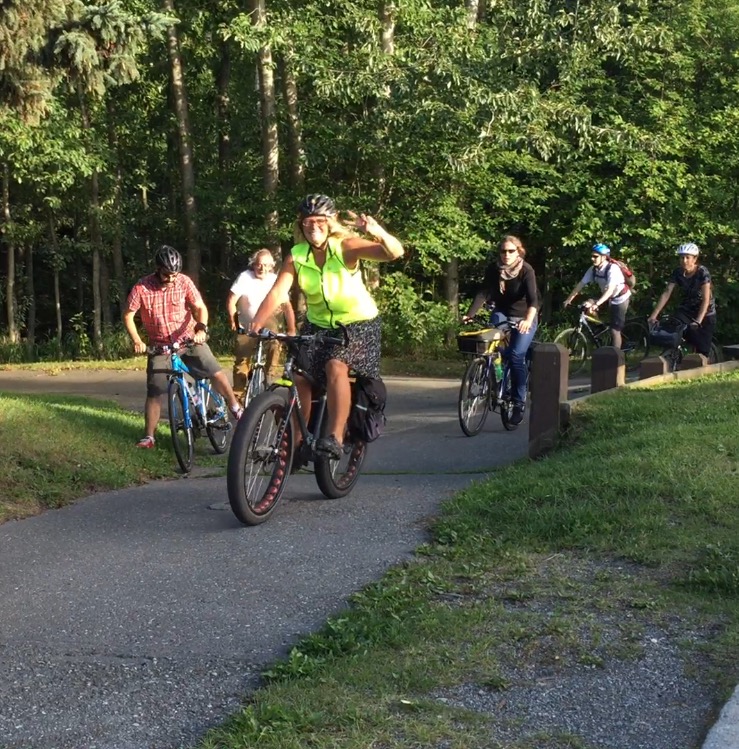 Final Stop - Back to Bosco’s

We had a great tour of Spenard thanks to a vibrant, active community. The tour highlighted how our built environment can support or impact community for all residents and visitors to an area. The Spenard Corridor Planning effort is just one example people can participate in to build a better, stronger community.

Jed Smith is the president of the Spenard Community Council and an avid bicycle and public transit commuter.