While they all have different backgrounds, they all have in common being active members of the cycling community, we invite you to know a little bit more about each one of them.

Brigit works at the Refugee Assistance and Immigration Services (RAIS) from the Catholic Social Services in Anchorage. She became an all-year commuter in Anchorage after moving here and not owning a car, she is a tough avid commuter that you can find on the trails despite impeccable weather.

Chelsea became an LCI to help others enjoy the fun of biking and teach them how to be safe while doing it. She works for the Municipality of Anchorage, has been on the Bike Anchorage board for a few years, and is passionate about improving traffic safety and active transportation in Anchorage. Chelsea started bike commuting when she was in the first grade, and continues to commute by bike all year. She supplements bike commuting with mountain and fat biking with her two dogs.

Christi is a civil engineer with CRW Engineering. Biking is a way for her to get to work, run errands, exercise, and stay involved in the community, and she's been biking since she was a kid. Christi is drawn to biking as a form of transportation that's healthier, more equitable, and more fun than a car. She is happy to help Anchorage's bike commuters learn best practices to stay safe.

Christina started to ride a bike as a little kid, doing laps up and down the street. Then, there was a big gap n her life without riding a bike until College, her uncle was a bike messenger in San Francisco and a big influence on her to consider the bicycle as a serious mode of transportation. She started riding her bike to school because parking was rough and expensive. After college, she moved to Alaska for a job.

A coworker suggested to sing up for the Tour of Anchorage, and she says she has no idea what she was doing but remembers realizing that riding hard was fun. She started to work part-time at The Bicycle shop just to learn more about bikes, then went mountain biking for the first time with her colleagues and never stop ever since. Christina was the manager at the Trek Store Anchorage for three years, and she has 10 years of bike shop retail experience in Anchorage, she is still working at The Bicycle Shop these days. She remembers how at the beginning there were only a couple of women working at bike shops, and how that has changed over the years.
Christina has been an active member of the cycling community for a long time, she is a certified bike fitter, she sat on the Fireweed Race Across Alaska board, she is part of the Singletrack Advocates board, she has been part of the American Lung Association's Clean Air Challenge leadership group since 2012, she has been a Mighty Bikes Coach, and a Girls Riding Into Tomorrow (GRIT) mentor. She started her own mountain bike guiding and mountain bike skills coaching business called Alaska Bike Adventures.

Devora became an urban cyclist when she was in law school at the age of 21, it happened because gas and parking were too expensive and public transportation was unsafe, unreliable and a terrible experience overall. She has been involved in transportation and urban planning ever since.

She has experience teaching Transportation subjects, it started while she was working in the municipality of her city in Mexico and she was part of the team that created the curriculum that would be taught to drivers that incurred misdemeanors or got tickets for endangering non-motorized users, the curriculum would teach drivers how to safely interact with cyclists, pedestrians, and people with disabilities and how to respect their infrastructure. She later was with Cycles of Change in Oakland, California teaching kids from the Fruitvale Elementary School how to be urban cyclists taking them for rides in the city, and teaching bike mechanics both in English and Spanish. Dev would love to teach Smart Cycling Classes in schools of the Anchorage School District in the future, and to adults who want to be bicycle commuters.

Donovan was born and raised in Fairbanks and first started using the bike as primary transportation during his senior year at UAF because one day in the middle of winter his truck stopped working. After learning to commute at -20F, everything else seemed like a breeze and he's been enjoying the many benefits of the bike as transportation ever since.

In 2015, Donovan graduated and moved to Anchorage to start working in the transportation engineering sector. He has become passionate about applying his knowledge and time to help mature and modernize the urban design policies in the city he loves and calls home.

She has lived in Anchorage since 2016 and has been an avid bike commuter since she was a teenager. The bike paths and trail system in and around Anchorage is one of her favorite things about the city, and she wants to be more involved in building the cycling community in Alaska.
Kaitlin is a strong rider with moderate technical knowledge about bikes and a huge commitment to road safety for drivers and cyclists. She is always trying to get new friends into biking and encouraging friends to commute more. She became a League Certified Instructor to learn how to help people overcome the challenges of becoming all-year-round bike commuters, and build good cycling habits.
In other parts of her life, Kaitlin is an environmental scientist, environmental engineer, and Ph.D. student working on water and sanitation in Alaska Native communities. She rides road bikes, mountain bikes, and do triathlons if the water isn't cold.

Mat first got into bicycling as a pre-teen and teenager, as a mode of transportation in the suburbs, then in college, they built a bike from scratch and started going on day rides. After college, they wanted to go on a bike trip but didn't have a cycling community and didn't know how to do it --so, Mat bungee'd a milk crate to their newly-built bike, threw a backpacking bag in, and rode with a friend, from NJ to Nashville over the course of a month, after this, she rode solo from San Diego to Montreal.

Most recently Mat bicycled to their homeland starting in the high Himalayas of India and down to Kerala at the tip of India, where her parents are from. After that long bike ride, they became committed to sharing her passion for bike trips as a way to see incredible places, taste delicious food, feel the generosity of strangers, and also as a way to uncover homeland, seek truths within oneself, and access personal power.

Mat co-wrote a chapbook called Asking for Elephants, and after went on a storytelling tour across the US. They are currently working on a book about that India ride, queerness, sobriety, and homeland. Mat is excited about the possibility of learning how to actually teach and instruct cycling so that they can offer tangible skills alongside storytelling.

You can see the list of all the Certified League Cycling Instructors in Anchorage and their contact information here. 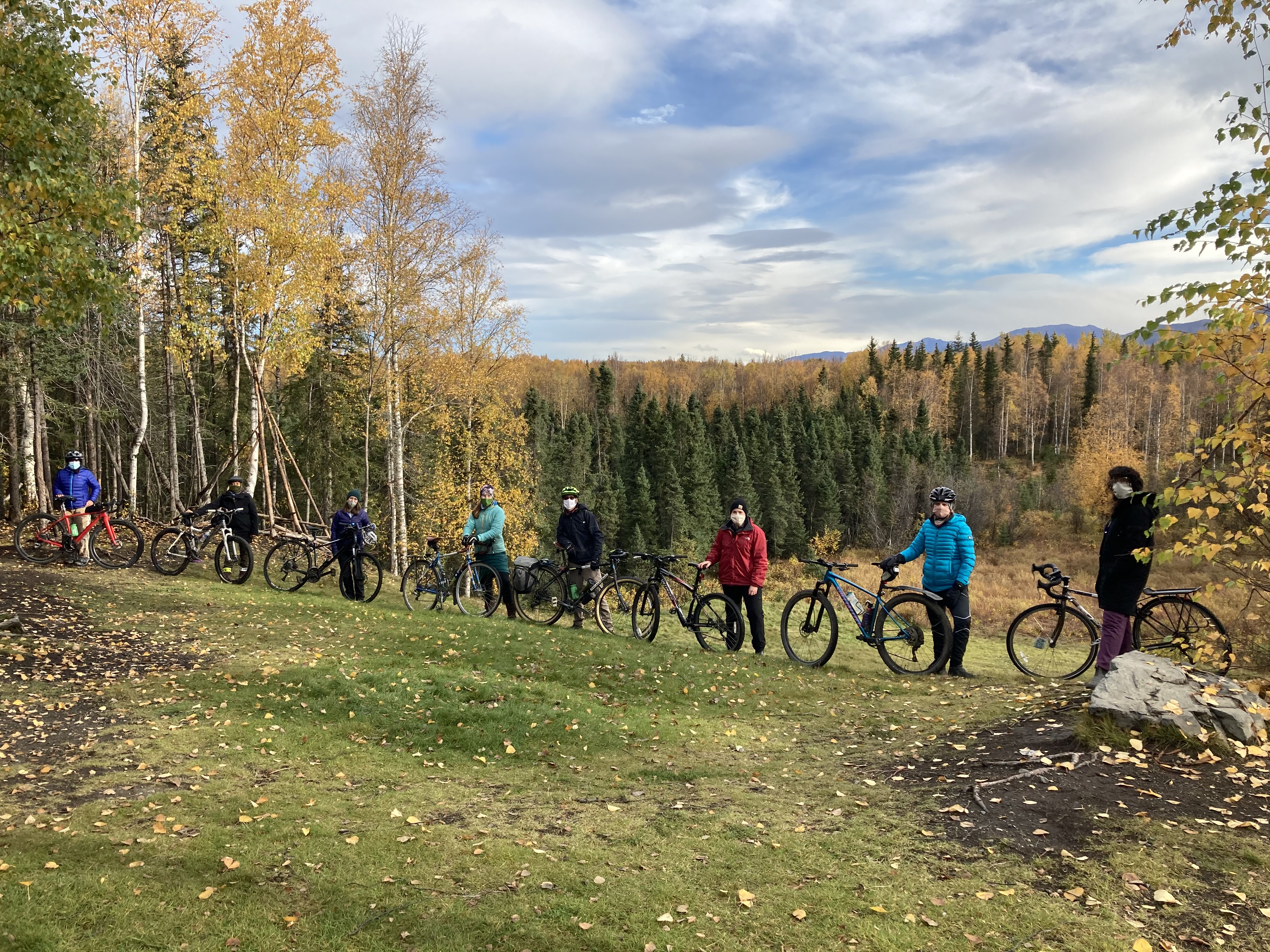 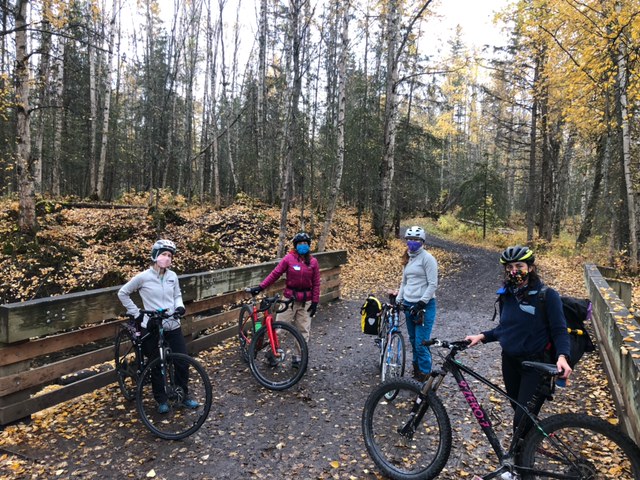 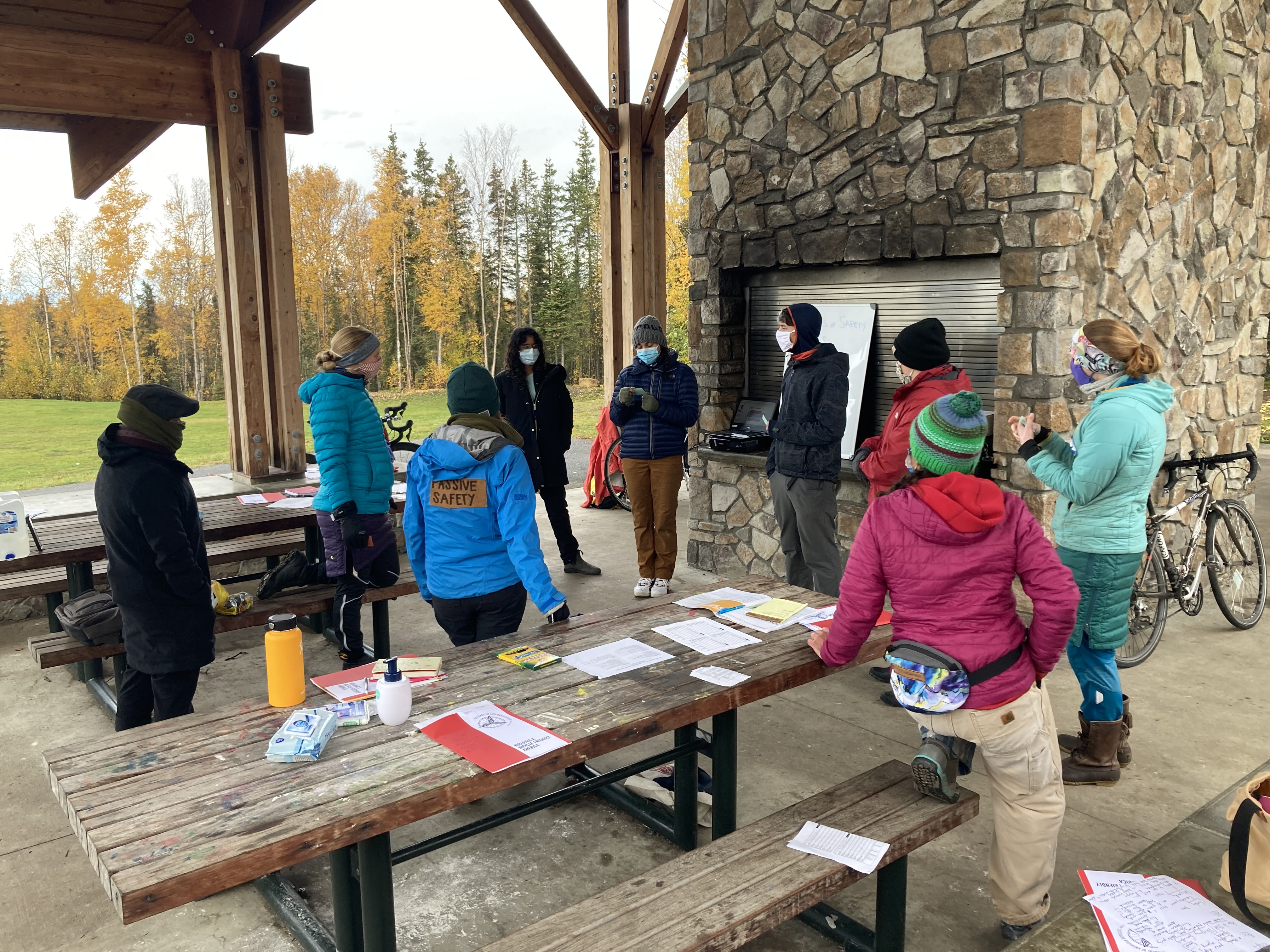